The room in Cumorah-Brigham Young 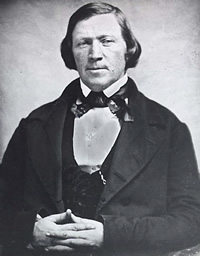 When he wrote Letter VII and the other letters, Oliver Cowdery mentioned that he was relying on original documents in his possession. We don't know what documents he was referring to. Perhaps they were journal entries or notes that have since gone missing.

Brigham Young once spoke about "an incident in the life of Oliver Cowdery" that was not documented in any writing we have from Oliver. (There are other accounts of this incident that I'll post, but I want to start with Brigham Young.)

This following passage is from a discourse by Brigham Young, delivered June 17, 1877, during a conference at Farmington, Utah. It is recorded in the Journal of Discourses, vol. 19, pp. 36-45, online here.

I lived right in the country where the plates were found from which the Book of Mormon was translated, and I know a great many things pertaining to that country. I believe I will take the liberty to tell you of another circumstance that will be as marvelous as anything can be. This is an incident in the life of Oliver Cowdery, but he did not take the liberty of telling such things in meeting as I take.

I tell these things to you, and I have a motive for doing so. I want to carry them to the ears of my brethren and sisters, and to the children also, that they may grow to an understanding of some things that seem to be entirely hidden from the human family.

Oliver Cowdery went with the Prophet Joseph when he deposited these plates. Joseph did not translate all of the plates; there was a portion of them sealed, which you can learn from the Book of Doctrine and Covenants. When Joseph got the plates, the angel instructed him to carry them back to the hill Cumorah, which he did.

Oliver says that when Joseph and Oliver went there, the hill opened, and they walked into a cave, in which there was a large and spacious room. He says he did not think, at the time, whether they had the light of the sun or artificial light; but that it was just as light as day. They laid the plates on a table; it
was a large table that stood in the room. Under this table there was a pile of plates as much as two feet high, and there were altogether in this room more plates than probably many wagon loads; they were piled up in the corners and along the walls.

The first time they went there the sword of Laban hung upon the wall; but when they went again it had been taken down and laid upon the table across the gold plates; it was unsheathed, and on it was written these words: “This sword will never be sheathed again until the kingdoms of this world become the kingdom of our God and his Christ.”

I tell you this as coming not only from Oliver Cowdery, but others who were familiar with it, and who understood it just as well as we understand coming to this meeting, enjoying the day, and by and by we separate and go away, forgetting most of what is said, but remembering some things. So is it with other circumstances in life.

I relate this to you, and I want you to understand it. I take this liberty of referring to those things so that they will not be forgotten and lost. Carlos Smith was a young man of as much veracity as any young man we had, and he was a witness to these things. Samuel Smith saw some things, Hyrum saw a good many things, but Joseph was the leader.

Now, you may think I am unwise in publicly telling these things, thinking perhaps I should preserve them in my own breast; but such is not my mind. I would like the people called Latter-day Saints to understand some little things with regard to the workings and dealings of the Lord with his people here upon the earth. I could relate to you a great many more, all of which are familiar to many of our brethren and sisters.
Posted by jonathan3d at 6:59 AM