The much-loved Richard Lloyd Anderson passed away on August 12, 2018. He was perhaps best known for his work on the Three Witnesses, including his book, Investigating the Three Witnesses. He was working on the Oliver Cowdery Papers at the time of his death at age 92.

He wrote many articles over the years. One, published in the Improvement Era in 1970, was titled "Confirming Records of Moroni's Coming." In it, Brother Anderson explained the important role President Cowdery's letters play in our understanding of Church history.

You can read his article here:

In the article, Brother Anderson notes this:

"The first published history of the coming of Moroni appeared in letter form in the Messenger and Advocate in 1835. [Note: this is Letter IV.] Its author was Oliver Cowdery, but its wealth of detail must be attributed largely to the Prophet."

Whether Oliver relied on the notebook he had when he first met Joseph in 1829 in Harmony, or whether Joseph related the details in 1834-5 when he helped Oliver write the eight letters, it does seem apparent that, as Brother Anderson said, "the details must be attributed largely to" Joseph Smith.

Which, of course, is what all the prophets have taught; i.e., that the Hill Cumorah of Mormon 6:6 is the very hill in New York from which Joseph obtained the record.

Posted by jonathan3d at 6:43 AM No comments:

Here's another of the signs on the memorial in Palmyra, New York. I'd like to see all of these statements on display in the Hill Cumorah visitors center. Even better, they should be mounted along the path between the parking lot on the top of the Hill Cumorah and the statue of Moroni.

In the meantime, every visitor to the Palmyra area who drives between the Sacred Grove and the Hill Cumorah passes by this memorial and at least has one chance to learn what the prophets have taught about the Hill Cumorah in New York. 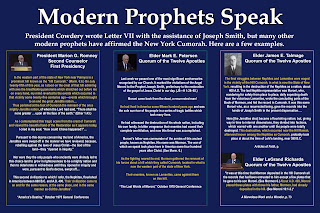 Posted by jonathan3d at 8:02 PM No comments: