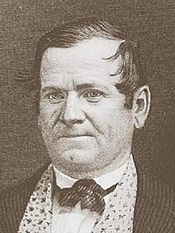 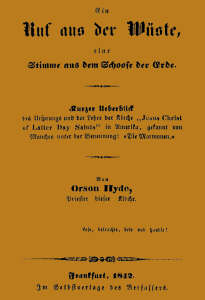 This is all just additional evidence of how well accepted Oliver Cowdery's letters were during Joseph Smith's lifetime.
Posted by jonathan3d at 5:07 AM No comments:

Letter VII was well established during Joseph Smith's lifetime. It was originally written by Oliver Cowdery, with the assistance of Joseph Smith. It was published in the Church newspaper in Kirtland, Ohio, called the Latter Day Saints' Messenger and Advocate, in July 1835. You can read the original here. It was republished several times, copied into Joseph's journal, etc.

Because Letter VII unequivocally declares that the Hill Cumorah is in New York--Oliver calls it a fact in the letter--people who advocate a Book of Mormon setting outside North America claim Oliver and Joseph were merely speculating when they wrote and published Letter VII.

Think about that a moment. If Joseph Smith was merely "speculating" about something as fundamental as Book of Mormon geography, and referenced this "speculation" in the scriptures (D&C 128), what implications does that have for everything else Joseph taught?

When you read about what Joseph actually wrote and said, the last thing you conclude is that he speculated. People who associated with him didn't consider him prone to speculation.

For example, Howard Coray was one of Joseph's scribes in Nauvoo, beginning in 1840. Here are some of his recollections of what it was like to work with Joseph Smith. Consider what he had to say and then compare that with the idea that Joseph merely speculated about the Hill Cumorah.
___________________

I went to work the next day after my arrival at his house. The first thing he gave [me] to do was to copy a large pile of letters into a Record. This labor was performed in his kitchen, having no other
place at that time to do such business—

While thus engaged, I had many very precious opportunities great and Small, almost every day, were calling on him, some for one thing, and some for another.— polititians and preachers and of different persuations—some with the view of testing the depth of his knowledge and, if possible, confounding him and putting [him] to shame. Well, what did I discover—that he was equal to every occasion, that he had a ready answer for all questions.
I heard him say that God had given him the key of knowledge by which he could trace any subject through all its ramifications...

Stephen A Douglass called to see him ask him some questions. One thing he desired to know, was how he managed to govern a people so diverse, coming from so many different countries with their peculiar manners and custims. “Well, he said “I simply teach them the truth, and they govern themselves,” was his ready answer.

Among other great men who called to see him was Cyrus Walker—a lawyer of much note; he tried to sound the Prophet, and see how deep he was. Well, it was with Walker, as it had been with all the others, he soon got enough, found Joseph too deep his lead and line, and gave up the enterprise. Thus it was in every instance that came under my observation: how could we expect it to be otherwise— for any man who had never peered into heaven and seen heavenly things, be a match for one who had a half a score or more heavenly messengers for teachers.
...
One morning, I went as usual, into the Office to go to work: I found Joseph sitting on one side of a table and Robert B. Thompson on the opposite side, and the understanding I got was that they were examining or hunting in the manuscript of the new translation of the Bible for something on Priesthood, which Joseph wished to present, or have read to the people the next Conference: Well, they could not find what they wanted and Joseph said to Thompson “put the manuscript one side, and take some paper and I will tell you what to write.” Bro. Thompson took some foolscap paper that was at his elbow and made himself ready for the business. I was seated probably 6 or 8 feet on Joseph’s left side, so that I could look almost squarely into Joseph’s left eye— I mean the side of his eye. Well, the Spirit of God descended upon him, and a measure of it upon me, insomuch that I could fully realize that God, or the Holy Ghost, was talking through him. I never, neither before or since, have felt as I did on that occasion. I felt so small and humble I could have freely kissed his feet.

While I was employed in this manner, I had many valuable opportunities; the Prophet had a great many callers or visitors, and he received them in his office, where I was clerking—persons of almost all professions—Doctors, Lawyers, Priests and people seemed anxious to get a good look at what was then considered something very wonderful: a man who should dare to call himself a prophet, announce himself as a Seer and embassador of the Lord. Not only were they anxious to see, but also to ask hard questions, in order to ascertain his depth. Well, what did I discover? This, verily that he was always equal to the occasion, and perfectly master of the situation; and, possessed the power to make everybody realize his superiority, which they evinced in an unmistakable manner. I could clearly see that Joseph was the captain, no matter whose company he was in. Knowing the meagerness of his education, I was truly gratified, at seeing how much at ease he always was, even in the company of the most scientific, and the ready off hand manner in which he would answer their questions.

Posted by jonathan3d at 4:58 PM No comments: