Most people focus on Letter VII because Joseph and Oliver emphasized that the Hill Cumorah in New York was the scene of the final battles of the Jaredites and the Nephites. That is important, but the letter also states that Mormon's depository (Mormon 6:6) was in the same hill.

Orson Pratt explained there were two "departments" in the Hill Cumorah: one for Moroni's stone box that contained the "Original Book of Mormon" and another department for Mormon's depository of all the Nephite records and artifacts.

Here is the schematic that shows how and why Joseph Smith used two sets of plates when he translated the Book of Mormon.

The depository in the hill Cumorah in New York (Mormon 6:6) was the site of all the Nephite records. Mormon gave his abridgment to Moroni, who added the abridgment (Book of Ether) along with his own comments when he "sealed" the record. Moroni put this set of plates into the stone box he constructed in a separate department of the hill Cumorah, as Orson Pratt explained long ago. This was the "original Book of Mormon" as Joseph Smith described it.

Joseph translated all of these plates (except the sealed portion) in Harmony, PA. He translated the title page there, which was on the last leaf of the plates. Then he and Oliver discussed going back to re-translate the Book of Lehi, the original translation of which Martin Harris had lost. Instead, the Lord told them they'd have to translate the plates of Nephi--except they didn't have the plates of Nephi. (D&C 10).

This is important to understand because it explains otherwise inexplicable events in Church history. It also corroborates what Joseph and Oliver taught about the Hill Cumorah in New York, which renders irrelevant all the theories of Book of Mormon geography that put Cumorah somewhere else. 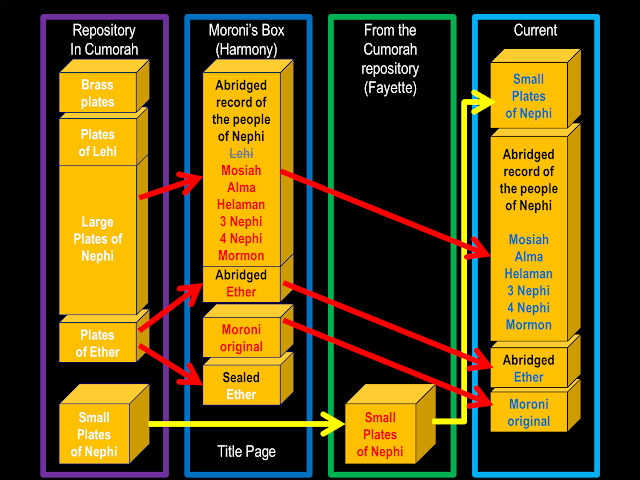