Sunday, June 1st, 1834, We had preaching, and many of the inhabitants of the town came to hear. Elder John Carter, who had formerly been a Baptist preacher, spoke in the morning, and was followed by four other Elders in the course of the day all of whom had formerly been preachers for different denominations.—

When the inhabitants heard these elders they appeared much interested, and were very desirous to know who we were, and we told them one had been a Baptist preacher, and one a Campbellite; one a Reformed Methodist, and another a Restorationer, &c.

During the day many questions were asked but no one could learn our names, profession, business or destination, and, although they suspected we were Mormons they were very civil. Our enemies had threatened that we should not cross the Illinois river, but on Monday the 2nd we were ferried over without any difficulty. The ferryman counted and declared there were five hundred of us; yet our true number was only about one hundred and fifty. Our company had been increased since our departure from Kirtland, by volunteers from different branches of the church through which we had passed.

We encamped on the bank of the river until Tuesday the 3rd during our travels we visited several of the mounds which had been thrown up be the ancient inhabitants of this county, Nephites, Lamanites, &c., and this morning I went up on a high mound, near the river, accompanied by the brethren. From this mound we could overlook the tops of the trees and view the prairie on each side of the river as far as our vision could extend, and the scenery was truly delightful.

On the top of the mound were stones which presented the appearance of three alters having been erected one above the other, according to ancient order; and human bones were strown over the surface of the ground.

The brethren procured a shovel and hoe, and removing the earth to the depth of about one foot discovered skeleton of a man, almost entire, and between his ribs was a Lamanitish arrow, which evidently produced his death, Elder Brigham Young retained the arrow and the brethren carried some pieces of the skeleton to Clay county.

The contemplation of the scenery before us produced peculiar sensations in our bosoms; and the visions of the past being opened to my understanding by the spirit of the Almighty I discovered that the person whose skeleton was before us, was a white Lamanite, a large thick set man, and a man of God. He was a warrior and chieftain under the great prophet Omandagus, who was know from the hill Cumorah, or Eastern sea, to the Rocky Mountains. His name was Zelph. The curse was taken from him or at least, in part; one of his thigh bones was broken, by a stone flung from a sling, while in battle, by the arrow found among his ribs, during the last great struggle of the Lamanites and Nephites. 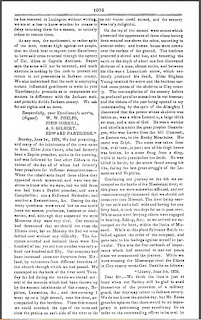