Repeat Over Again...the Same Things as Before 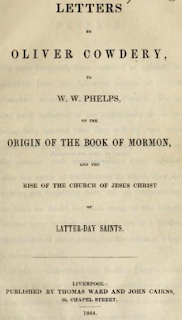 A question has arisen as to why Letter VII and the other letters written by Oliver Cowdery were reprinted so often. I happened to be reading a devotional address by Elder Bednar and thought it might be an answer.


We have learned to treasure the spiritual gems that are revealed through repetition. The distinctive nuggets of inspiration and spiritual knowledge that flow into our minds and hearts as we repeatedly teach and testify of gospel truths are the product of a line upon line and precept upon precept pattern of revelation. Repetition is a vehicle through which the Holy Ghost can enlighten our minds, influence our hearts, and enlarge our understanding.

Have you ever heard a Sunday School teacher introduce the topic for a lesson and thought, “I already know about this subject?” Have you ever heard a speaker in sacrament meeting identify the theme about which he or she will speak and responded, “Not again?” Have you ever wondered, “Why do Church leaders always address the same basic doctrine and principles in general conference?” Have you ever “checked out” mentally and spiritually because you anticipated an episode of repetitious teaching? We all have, of course. And we need to repent for doing so and more fully appreciate the value of repetition as a means of facilitating revelation.
____________

Orson Pratt quoted from Letter VII in his 1840 pamphlet, Interesting Account of Several Remarkable Visions, which is online here.

Later, when Benjamin Winchester asked for permission to reprint Oliver's letters, Joseph readily agreed. It wasn't until March 1841 that Winchester finally published the letters, as a single narrative, in the Gospel Reflector. That made the letter available to the Saints in Philadelphia and the Eastern States. Later, when the issues of the Gospel Reflector were bound, the volume was sold in Nauvoo. Wilford Woodruff purchased a copy for a friend who wanted to know what Mormons believed. The bound copy was, in effect, yet another republication of Letter VII.

Don Carlos Smith was the editor of the Times and Seasons in Nauvoo. Beginning in late 1840, he published portions of the Cowdery letters as well. Letter VII was published on April 15, 1841, making it available to the Saints in Nauvoo and to anyone who subscribed to the newspaper.

The letters were published as a separate pamphlet in Liverpool in 1844. That pamphlet was adapted from Winchester's Gospel Reflector and is available online here.

I think Letter VII was reprinted so many times because it was so important. Oliver's history was the most complete history of the early days of the Church until the serialized History of Joseph Smith began running in the Times and Seasons in 1842, but it was also important for people to know that the New York hill was a touchstone for the Book of Mormon. It was a connection between ancient and modern times--a pin in the map.

In fact, had Letter VII been republished after Joseph died, and maintained as prominently as it was when Joseph was alive, alternative theories about Cumorah may never have arisen.
Posted by jonathan3d at 4:03 PM