One way to think about Book of Mormon geography is a series of decisions. Decision tree analysis lets people see their choices, and the consequences of their choices.

Start with the Hill Cumorah (the one described in the text, where the Jaredites and Nephites fought their final battles). 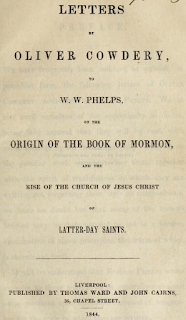 Oliver Cowdery's eight letters to W.W. Phelps contained the first detailed descriptions of many early Church history events, including the discussion of the Hill Cumorah in Letter VII. Oliver introduced the letters with this statement in the October 1834 Messenger and Advocate, which is online here:

"That our narrative may be correct, and particularly the introduction, it is proper to inform our patrons, that our brother J. SMITH jr. has offered to assist us. Indeed, there are many items connected with the fore part of this subject that render his labor indispensable. With his labor and with authentic documents now in our possession, we hope to render this a pleasing and agreeable narrative, well worth the examination and perusal of the Saints.-To do justice to this subject will require time and space: we therefore ask the forbearance of our readers, assuring them that it shall be founded upon facts."

It's a simple choice.

Others read Letter VII first and decide whether to accept or reject it. Then they move on from there.

I think the second approach makes more sense; i.e., ask what Oliver (and Joseph) said about the topic, and decide whether to reject or accept what they said. After all, they were the ones who translated the text. Together, they interacted with Moroni, John the Baptist, Peter, James, and John, Elijah, Elias and the Lord Himself. Oliver wrote Letter VII, but Joseph endorsed it fully. In fact, he wrote Oliver a brief letter in response to the first of the letters to clarify a few points about his "life and character." Oliver published the letter in the Messenger and Advocate. Joseph was free to comment on the other letters, but he never did. Instead, he had his scribe copy them into his journal as part of his story.

No one says you have to accept or reject Letter VII. We all make up our own minds, based on the evidence. But the decision tree analysis lets us clearly see the decisions we make.

Whether you accept or reject Letter VII, you can next consider David Whitmer's statement that he heard about Cumorah from a heavenly messenger before the translation of the Book of Mormon was even completed. If you believe him, you think the Hill Cumorah is in New York. If you don't believe him, then you think it is elsewhere.

You can proceed in this fashion through all the different Church history statements, the text itself, and the various applicable sciences.