The Plains of the Nephites and the Hill Cumorah 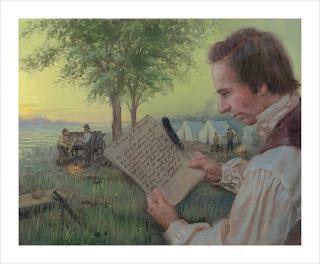 4. 1834 letter to Emma. This is the letter Joseph wrote to Emma during Zion's Camp. He was on the eastern bank of the Mississippi and explained how the camp, which had just crossed Illinois, Indiana, and Ohio, had been “wandering over the plains of the Nephites, recounting occasionaly the history of the Book of Mormon, roving over the mounds of that once beloved people of the Lord, picking up their skulls & their bones, as a proof of its divine authenticity.” We don't have the original of this letter, but the letter was copied into a letterbook which we do have. Consequently, it is in the handwriting of the scribe.

5. 1835 Letter VII. Everyone who reads this blog by now should know that Oliver Cowdery wrote Letter VII to explain that Cumorah--in New York--was the scene of the final battles. In it, he expounded on “the fact, that here, between these hills, the entire power and national strength of both the Jaredites and Nephites were destroyed.” He leaves no room for conjecture about this. However, as brother Hedges points out, Oliver did not discuss "the extent of Nephite lands or settlement, or where their civilization may have been centered."

Since 2007, we've seen that Letter VII was far more widespread and even ubiquitous during Joseph Smith's lifetime. It was published in the Messenger and Advocate (1835), copied into Joseph's journal as part of his life history (1835), quoted in Orson Pratt's 1840 pamphlet, republished in the Times and Seasons (1841) and the Gospel Reflector (1841), and published in Edinburgh (1844) along with the other seven letters in a special pamphlet. Joseph gave Winchester specific permission to publish Oliver's letters. I can't find any uncertainty or speculation about the New York Cumorah until the 1920s, when scholars from the Reorganized Church of Jesus Christ of Latter-day Saints first developed the two-Cumorah theory. Joseph Fielding Smith denounced that, "because of this theory some members of the Church have become confused and greatly disturbed in their faith in the Book of Mormon." Nevertheless, LDS scholars picked up the RLDS theory and now, as of 2016, it is the prevailing theory among scholars, portrayed in Church media (including the Arnold Friberg paintings in the pages of the text itself). The two-Cumorah theory is as ubiquitous today as Letter VII was during Joseph Smith's day.

Summary: These letters put a pin in the map for the New York Cumorah and, arguably, for the plains of the Nephites (mentioned in several verses) in the Midwest. They are not specific about other locations, however.
Posted by jonathan3d at 2:44 PM