The discussion about the New York Cumorah presents people with a simple, clear choice about whom you follow and how you interact with the scriptures, particularly the text of the Book of Mormon but also the Doctrine and Covenants and Pearl of Great Price.

Choice 1: Scholarly, subjective speculations about the text and extrinsic evidence that guide our interpretation of the location of Cumorah.

Choice 2: Prophetic, factual statements about Cumorah in New York that guide our interpretation of the text and extrinsic evidence.

It's a bizarre "tail wags the dog" scenario. The scholars insist the prophets are wrong solely because of their subjective speculations about where the Nephites must have lived, which leads them to develop "criteria" for Cumorah based on extrinsic evidence from their speculations. For example, because they insist the Nephites lived in Mesoamerica, they also insist Cumorah must be in a land of volcanoes, even though the text never mentions volcanoes. They insist Cumorah must be in a place inhabited by millions of ancient people, even though the text never says or implies that was the case.

When we read what the text actually says, as opposed to what commentators have said about what the text says, it's easy to reconcile the teachings of the prophets about Cumorah with the extrinsic evidence. For example, we can see that population estimates based on the text are congruent with extrinsic evidence from archaeology and anthropology in western New York, Ohio, etc. I discussed some of that here:

A. Historical facts (documents and extrinsic evidence). Because we're dealing with history, and no one is claiming any new revelation about that history, everyone is on a level playing field. No one has "special knowledge" about history because of their experience, credentials, positions, etc. Anyone who can read and understand English has equal access to all the facts.

B. Interpretation of those facts (multiple working hypotheses). This is where it is easy to get confused. Often, historians write in a style that presents their hypotheses as facts. Obviously, they have no personal knowledge of historical facts; they rely on evidence just like everyone else. This is a standard persuasive technique, but don't accept historians' statements as fact without seeing the evidence they rely upon. In the context of Church history, historians who are both believers and unbelievers use this rhetorical style. Discerning readers can tell the difference.

Ideally, we first establish the facts. Everyone should be able to agree about what the facts are. Proponents often avoid, discount, or even censor facts that contradict their hypotheses, but that's easy to expose. 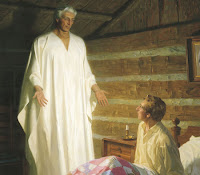 For example, ask yourself, did you know that Joseph's mother reported that Moroni identified the hill in New York as Cumorah the first time he visited Joseph Smith in 1823?

Moroni said, "the record is on a side hill on the Hill of Cumorah 3 miles from this place."

If you don't know that, why don't you know that?

Ask your BYU or CES teacher. Or ask the teachers of your children or grandchildren.

It is inexcusable that Latter-day Saints don't know about this.

As a test, if you search for that phrase on Fairlatterdaysaints.org, you get two results, here and here. Both are buried in discussions about the First Vision, and both cite Dan Vogel's Early Mormon Documents book, volume 1, instead of the Joseph Smith Papers.

If fairlatterdaysaints.org was a legitimate educational organization instead of an advocacy front for the M2C citation cartel, they would feature Lucy's account in their discussions of Cumorah. But they don't and they won't. They don't want Church members to know about anything that contradicts M2C.

Every sincere seeker of truth should be able to agree on what the facts are.

Next, we interpret those facts to develop hypotheses that explain and reconcile the facts in various ways. This involves assessing reliability, credibility, authenticity, and other indicia of truthfulness. Much of that analysis is subjective, but that's fine so long as we clearly explain our reasoning.

Different people develop different hypotheses that reflect their respective biases, desired outcomes, values, priorities, etc. Some people claim they "follow the evidence" but we can all see that is a delusion. The worst extreme of bias confirmation is not recognizing your own biases--or actually believing you have no bias.

To repeat: Because we're dealing with history, and no one is claiming any new revelation about that history, everyone is on a level playing field. We all have access to all the evidence.

In this short post, I can't list all the evidence about Cumorah (some of it is here), but readers of this blog by now are familiar with it. Really, regarding Cumorah there is very little debate about the evidence itself. The debate involves (i) disclosing and (ii) interpreting the evidence.

Here's a table that illustrates the two separate approaches to the Cumorah issue. Most references are here: http://www.lettervii.com/p/byu-packet-on-cumorah.html