Cumorah was once great

In previous generations, the Hill Cumorah in New York was considered great among Latter-day Saints. Now, our scholars relegate it to a nameless hill that is important only because Moroni buried the plates there after traveling 3400 miles from Central America.

But we don't have to accept what modern scholars say.

We can Make Cumorah Great Again.

Here's an example from The Latter-Day Saints' Millennial Star from 1866. 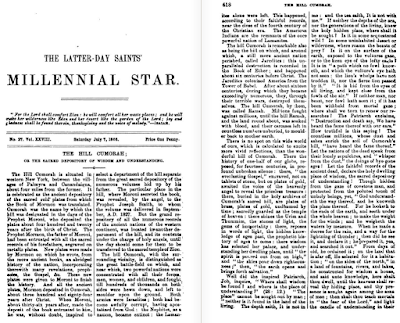 "Cumorah was the name by which the hill was designated in the days of the Prophet Moroni, who deposited the plates about four hundred and twenty years after the birth of Christ... And all the ancient plates, Mormon deposited in Cumorah, about three hundred and eighty-four years after Christ. When Moroni, about thirty-six years after, made the deposit of the book entrusted to him, he was, without doubt, inspired to select a department of the hill separate from the great sacred depository of the numerous volumes hid up by his father...."
Posted by jonathan3d at 12:45 PM