The Hill Cumorah: the sacred depository 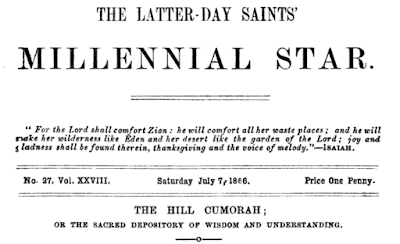 On July 7, 1866, The Latter-Day Saints' Millennial Star ran a front-page article by Orson Pratt titled "The Hill Cumorah: Or the Sacred Depository of Wisdom and Understanding." This is in volume 28, No. 27. At the time, the Millennial Star was "Edited, Printed and Published by Brigham Young, Jun." in Liverpool.

You can see it in the original format on google books here.

The article was republished in The Contributor in September, 1882, Vol. III, No. 12. online here. The Contributor was an independent Mormon magazine intended for the Young Men's and Young Ladies' Mutual Improvement Associations.

Because a lot of people have never seen this article, I'm republishing it here.

I'm not going to comment much, except to say we have to keep in mind that although Orson Pratt knew Cumorah was in New York, he speculated about the rest of the Book of Mormon geography. This is reflected in his 1879 footnotes to the Book of Mormon, in which he stated unequivocally that Cumorah was in New York but referred to other locations as possibilities; e.g., "it is believed that. Orson was not Joseph or Oliver; he didn't experience the repository directly, so he may not have all the details correct, but there's a lot of great material here for those who have eyes to see.

Pratt uses a lot of flowerly rhetoric, so the style seems strange to modern readers. I've divided the article into smaller paragraphs for easier reading. I've bolded some key points.


THE HILL CUMORAH;
or the Sacred Depository of Wisdom and Understanding

The Hill Cumorah is situated in western New York, between the villages of Palmyra and Canandaigua, about four miles from the former. It is celebrated as the ancient depository of the sacred gold plates from which the Book of Mormon was translated.

Cumorah was the name by which the hill was designated in the days of the Prophet Moroni, who deposited the plates about four hundred and twenty years after the birth of Christ. The Prophet Mormon, the father of Moroni, had been entrusted with all the sacred records of his forefathers, engraved on metalic [sic] plates. New plates were made by Mormon on which he wrote, from the more ancient books, an abridged history of the nation, incorporating therewith many revelations, prophecies, the Gospel, &c.

These new plates were given to Moroni to finish the history. And all the ancient plates, Mormon deposited in Cumorah, about three hundred and eighty-four years after Christ.

When Moroni, about thirty-six years after, made the deposit of the book entrusted to him, he was, without doubt, inspired to select a department of the hill separate from the great sacred depository of the numerous volumes hid up by his father.

The particular place in the hill, where Moroni secreted the book, was revealed, by the angel, to the Prophet Joseph Smith, to whom the volume was delivered in September, A.D. 1827. But the grand repository of all the numerous records of the ancient nations of the western continent, was located in another department of the hill, and its contents under the charge of holy angels, until the day should come for them to be transferred to the sacred temple of Zion.

The hill Cumorah, with the surrounding vicinity, is distinguished as the great battle-field on which, and near which, two powerful nations were concentrated with all their forces, men, women, and children, and fought till hundreds of thousands on both sides were hewn down, and left to moulder upon the ground.

Both armies were Israelites; both had become awfully corrupt, having apostatized from God: the Nephites, as a nation, became extinct: the Lamanites alone were left. This happened, according to their faithful records, near the close of the fourth century of the Christian era. The American Indians are the remnants of the once powerful nation of Lamanites.

The hill Cumorah is remarkable also as being the hill on which, and around which, a still more ancient nation perished, called Jaredites: this unparalleled destruction is recorded in the Book of Ether; and happened about six centuries before Christ.

The Jaredites colonised [sic] America from the Tower of Babel. After about sixteen centuries, during which they became exceedingly numerous, they, through their terrible wars, destroyed themselves. The hill Cumorah, by them, was called Ramah. Millions fought against millions, until the hill Ramah, and the land round about, was soaked with blood, and their carcases left in countless numbers unburied, to moulder back to mother earth.

There is no spot on this wide world of ours, which is calculated to excite more vivid reflections, than the wonderful hill of Cumorah. There the history of one-half of our globe, reposed, for fourteen centuries, in profound unbroken silence: there, ‘the everlasting Gospel,’ engraved, not on tablets of stone, but on plates of gold, awaited the voice of the heavenly angel to reveal the priceless treasure: there, buried in the holy archives of Cumorah’s sacred hill, are plates of brass, plates of gold, undimmed by time; sacredly guarded as the temple of heaven: there shines the Urim and Thummim, the stones of light, the gems of immortality: there, reposes in words of light, the hidden knowledge of ages past, the prophetic history of ages to come: there wisdom has selected her palace, and understanding her dwelling place, until "the spirit is poured out from on high" and "the skies pour down righteousness;" then, "the earth opens and brings forth salvation."

Well did the inspired Patriarch, Job, inquire "Where shall wisdom be found? and where is the place of understanding?" (28:12) "The place" cannot be sought out by man; "neither is it found in the land of the living. The depth saith, It is not in me: and the sea saith, It is not with me." If neither the depths of the sea, nor the generations of the living, know the holy hidden place, where shall it e sought? Is it in some sequestered wild? in some uninhabited desert or wilderness, where roams the beasts of prey? Is it on the surface of the earth, exposed to the vultures gaze, or to the keen eye of the lofty eagle?

It is in "a path which no fowl knoweth, and which the vulture's eye hath not seen: the lion's whelps have not trodden it, nor the fierce lion passed by it." "It is hid from the eyes of all living, and kept close from the fowls of the air." If neither man, nor beast, nor fowl hath seen it; if it has been withheld from mortal gaze; where shall we turn to renew our researches?

The Patriarch exclaims, "Destruction and death say, We have heard the fame thereof with our ears." How truthful is this saying! The countless millions, whose dust and ashes enrich the soil of Cumorah's hill, "have heard the fame thereof." Let the nations of the dead speak from their lonely sepulchres, and "whisper from the dust" the doings of bye-gone ages! Let the faithful records of hte ancient dead, declare the holy dwelling place of wisdom, the sacred depository of understanding!

Though hidden from the gaze of covetous man, and protected from the poluted [sic] touch of unholy beings, yet, "God understandeth the way thereof, and he knoweth the place thereof. For he looketh to the ends of the earth, and seeth under the whole heaven; to make the weight for the winds; and he weigheth the waters by measure. When he made a decree for the rain, and a way for the lightning of thunder; then did he see it, and declare it; he prepared it, yeah, and searched it out."

From days of old, he ordained it; on the land that is afar off, He selected for it a habitation; "on the sides of the north," in a land of fountains, rivers, and lakes, he constructed for wisdom a house, and said unto knowledge, here shalt thou dwell, until the heavens shall reveal thy hiding place, and thy presence is sought again among the sons of men; then shalt thou teach mortals in "the fear of the Lord," and light the candle of understanding in their hearts; then shalt thou dwell in Zion, and light up the habitations thereof with thy glory.

These holy treasures, these sacred archives are too precious to be bought with the riches of this world. Hence, Job says, "It cannot be gotten for gold, neither shall silver be weighed for the price thereof. It cannot be valued with the gold of Ophir, with the precious onyx, or the sapphire. The gold and the crystal cannot equal it: and the exchange of it shall not be for jewels of fine gold. No mention shall be made of coral, or of pearls: for the price of wisdom is above rubies. The topaz of Ethiopia shall not equal it, either shall it be valued with pure gold."

All the wealth of ages is valueless, compared with the records of eternal wisdom, the inexhaustible fountain of understanding, hidden in the secret recesses of the wonderful—the beautiful—the lovely hill Cumorah! O, Cumorah! the hill of ancient Seers and Prophets! the hill  of God! Sanctified by holy angels’ feet!

From thy bowels is heard a voice, low, sweet, mild, of heavenly tones! yet it thrills through every fibre of the heart! It speaks of man—of God— of earth—of heaven—of hell! It speaks of the past—of the future—of the destiny of nations— the reign of Messiah—the resurrection—the final judgment!

Let Zion sing for joy! let the heavens be full of praise; for thou, O Lord, makest the earth to disclose its wonders; though bringest forth truth from the bowels thereof! thou openest the gates of wisdom, and showest thy word unto the sons of men! Hidden things are brought to light--things most precious to the soul! let th hills and mountains break forth into signing! let the earth itself utter songs of everlasting joy! let glory, honor, and everlasting power, be unto Him who sitteth upon throne, who beholdeth the keys of Creation and Redemption forever more.