Assistant President of the Church 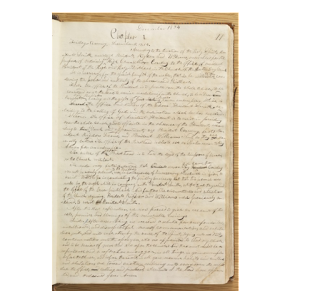 Here's another thing I'd like people to consider. Joseph Smith's History, 1834-1836, is the one that contains Oliver's letters, including Letter VII. You can find it in the Joseph Smith Papers. This link starts with Chapter 1 on page 17. Oliver's letters appear several pages later.

The first entry deals with the ordination of Oliver Cowdery to the office of assistant President of the Church. This was on December 5, 1834.

Because I suspect many people have never read this entry, I'll copy it here. Read this and then see what you think about Oliver's credibility and reliability. Recall that he had already started writing his series of letters, but Letter VII came a few months after this ordination. About six months after that, in April 1836, Joseph and Oliver together received the keys of the Priesthood from Moses, Elias,and Elijah.

I'm just copying the material below, with bold for emphasis. Enjoy.

Chapter 1.
5 December 1834 • Friday
Friday Evening, December 5, 1834. According to the direction of the Holy Spirit, President Smith, assistant Presidents, Sidney Rigdon and Frederick G. Williams, assembled for the purpose of ordaining first High Counsellor Oliver Cowdery to the office of assistant President of the High and Holy Priesthood in the Church of the Latter-Day Saints.

It is necessary, for the special benefit of the reader, that he be instructed into, or concerning the power and authority of the above named Priesthood.

First. The office of the President is to preside over the whole Church; to be considered as at the head; to receive revelations for the Church; to be a Seer, Revelator and Prophet— having all the gifts of God:— taking Moses for an ensample. Which is the office and station of the above President Smith, according to the calling of God, and the ordination which he has received.7
Second. The office of Assistant President is to assist in presiding over the whole church, and to officiate in the abscence of the President, according to his rank and appointment, viz: President Cowdery, first; President Rigdon Second, and President Williams Third, as they were severally called. The office of this Priesthood is also to act as Spokesman—taking Aaron for an ensample.8
The virtue of the above Priesthood is to hold the keys of the kingdom of heaven, or the Church militant.9
The reader may further understand, that the reason why High Counsellor Cowdery was not previously ordained to the Presidency, was, in consequence of his necessary attendance in Zion, to assist Wm W. Phelps in conducting the printing business; but that this promise was made by the angel while in company with President Smith, at the time they recievd the office of the lesser priesthood.10 And further: The circumstances and situation of the Church requiring, Presidents Rigdon and Williams were previously ordained, to assist President Smith.
After this short explination, we now proceed to give an account of the acts, promises, and blessings of this memorable Evening:
First. After assembling, we received a rebuke for our former low, uncultivated, and disrespectful manner of communication, and salutation, with, and unto each other, by the voice of the Spirit, saying unto us: Verily, condemnation resteth upon you, who are appointed to lead my Church, and to be saviors of men:11 and also upon the church: And there must needs be a repentance and a reformation among you, in all things, in your ensamples before the Chuch, and before the world, in all your manners, habits and customs, and salutations one toward another—rendering unto every man the respect due the office, calling, and priesthood, whereunto I the Lord have appointed and ordained you. Amen. [p. 17]

It is only necessary to say, relative to the foregoing reproof and instruction, that, though it was given in sharpness, it occasioned gladness and joy, and we were willing to repent and reform, in every particular, according to the instruction given. It is also proper to remark, that after the reproof was given, we all confessed, voluntarily, that such had been the manifestations of the Spirit a long time since; in consequence of which the rebuke came with greater sharpness.

Not thinking to evade the truth, or excuse, in order to escape censure, but to give proper information, a few remarks relative to the situation of the Chuch previous to this date, is necessary. Many, on hearing the fulness of the gospel, embraced it with eagerness; yet, at the same time were unwilling to forego their former opinions and notions relative to Church government, and the rules and habits proper for the good order, harmony, peace, and beauty of a people destined, with the protecting care of the Lord, to be an ensample and light of the world. They did not dispise government; but there was a disposition to organize that government according to their own notions, or feelings. For example: Every man must be subjected to wear a particular fashioned coat, hat, or other garment, or else an accusation was brought that we were fashioning after the world. Every one must be called by their given name, without respecting the office or ordinance to which they had been called: Thus, President Smith was called Joseph, or brother Joseph; President Rigdon, brother Sidney, or Sidney, &c. This manner of address gave occasion to the enemies of the truth, and was a means of bringing reproach upon the Cause of God. But in consequence of former prejudices, the Church, many of them, would not submit to proper and wholesome order.12 This proceeded from a spirit of enthusiasm, and vain ambition—a desire to compel others to come to certain rules, not dictated by the will of the Lord; or a jealous fear, that, were men called by thier respective titles, and the ordinance of heaven honored in a proper manner, some were in a way to be exalted above others, and their form of government disregarded. In fact, the true principle of honor in the Church of the Saints, that the more a man is exalted, the more humble he will be, if actuated by the Spirit of the Lord, seemed to have been overlooked; and the fact, that the greatest is least and servant of all, as said our Savior,13 never to have been thought of, by numbers. These facts, for such they were, when viewed in their proper light, were sufficient, of themselves to cause men to humble themselves before the Lord; but when communicated by the Spirit, made an impression upon our hearts not to be forgotten. [p. 18]

Perhaps, an arrangement of this kind in a former day would have occasioned some unpleasant reflections, in the minds of many, and at an earlier period, in this church, others to have forsaken the cause, in consequence of weakness, and unfaithfulness; but that the leaders of the church should wait so long before stepping forward according to the manifestation of the Spirit, deserved a reproof. And that the church should be chastened, for their uncultivated manner of salutation, is also just. But to proceed with the account of the interview.

After addressing the throne of mercy,14 President Smith laid hands upon High Counsellor Cowdery, and ordained him to the Presidency of the High priesthood in the Church, saying:

Brother, In the name of Jesus Christ of Nazareth, who was crucified for the sins of the world, that we through the virtue of his blood might come to the Father,15 I lay my hands upon thy head, and ordain thee a President of the high and holy priesthood, to assist in presiding over the Church, and bearing the keys of this kingdom—16 which priesthood is after the order of Melchizedek— which is after the order of the Son of God—17 And now, O Father, wilt thou bless this thy servant with wisdom, knowledge, and understanding— give him, by the Holy Spirit, a correct understanding of thy doctrine, laws, and will— Commune with him from on high— let him hear thy voice, and receive the ministring of the holy angels— deliver him from temptation, and the power of darkness— deliver him from evil,18 and from those who may seek his destruction,— be his shield, his buckler, and his great reward—19 endow him with power from on high,20 that he may write, preach, and proclaim the gospel to his fellowmen in demonstration of the Spirit and of power—21 may his feet never slide— may his heart never feint— may his faith never fail. Bestow upon him the blessings of his fathers Abraham, Isaac, Jacob, and of Joseph— Prolong his life to a good old age, and bring him in peace to his end, and to rejoice with thy saints, even the sanctified, in the celestial kingdom;22 for thine is the kingdom, the power, and the glory, forever. Amen.23

Presidents Rigdon, and Williams, confirmed the ordinance and blessings by the laying on of hands and prayer, after which each were blessed with the same blessings and prayer.
Much light was communicated to our minds, and we were instructed into the order of the Church of the saints, and how they ought to conduct in respecting and reverencing each other. The praise of men, or the honor of this world, is of no benefit; but if a man is respected in his calling, and considered to be a man of righteousness, the truth may have an influence, many times, by which means they may teach the gospel with success, and lead men into the kingdom of heaven. [p. 19]

6 December 1834 • Saturday
On Saturday, December 6, Presidents Smith, Oliver Cowdery, and Sidney Rigdon assembled with High Counsellors Joseph Smith sen. Hyrum Smith, and Samuel H. Smith,24 in company with Reynolds Cahoon, Counsellor to the Bishop, High Priest William Smith, and Elder Don Carlos Smith.
The meeting was opened by prayer, and a lengthy conversation held upon the subject of introducing a more refined order into the Church. On further reflection, the propriety of ordaining others to the office of Presidency of the high priesthood was also discussed, after which High Counsellor Hyrum Smith was ordained to the Presidency under the hands of President Smith, and High Counsellor Joseph Smith sen. under the hands of President Rigdon. The others present were blessed under the hands of Presidents J. Smith jr. Cowdery, and Rigdon, and the meeting closed, after a happy season, and a social intercourse upon the great subject of the gospel and the work of the Lord in this day. [24 lines blank] [p. 20]

After several blank pages, Oliver Cowdery's letters are copied into this history.