September 2023 is the 200th anniversary of Moroni's visit to Joseph Smith.

During that visit, Moroni told Joseph that

During that visit, Moroni also explained what the record was about and where it was written:

He [Moroni] then proceeded and gave a general account of the promises made to the fathers, and also gave a history of the aborigenes of this country, and said they were literal descendants of Abraham. He represented them as once being an enlightned and intelligent people, possessing a correct knowledge of the gospel, and the plan of restoration and redemption. He said this history was written and deposited not far from that place, and that it was our brother’s privilege, if obedient to the commandments of the Lord, to obtain and translate the same by the means of the Urim and Thummim, which were deposited for that purpose with the record.

Earlier this month the BBC published a travel article about "The US' 2,000-year-old mystery mounds."

Heading: "Constructed by a mysterious civilisation that left no written records, the Hopewell Ceremonial Earthworks are a testament to indigenous sophistication."

All of these all these prehistoric ceremonial earthworks in Ohio were created by what is now called the Hopewell Culture, a network of Native American societies that gathered from as far away as Montana and the Gulf of Mexico between roughly 100 BCE and 500 CE and were connected by a series of trade routes. Their earthworks in Ohio consist of shapes – like circles, squares and octagons – that were often connected to each other. Archaeologists are only now beginning to understand the sophistication of these engineering marvels.

Of course, 100 BCE is about the time when Mosiah discovered the people of Zarahemla and taught them a written language, which led to the flourishing of Nephite society. Many Latter-day Saints think Mosiah left from eastern Tennessee and joined the people of Zarahemla in present-day Illinois. From there, the civilization expanded eastward into Indiana and Ohio. Eventually, around 400 AD, fleeing from Lamanite attacks, the Nephite civilization retreated to western New York where the survivors were killed off by the Lamanites. All of this aligns with the archaeological record.

The US Department of the Interior has nominated eight of Hopewell's earthworks for consideration in 2023 as a Unesco World Heritage site. These include The Great Circle and The Octagon in Newark, Ohio, as well Ohio's first state park, Fort Ancient (not an actual fort). The other five are part of the Hopewell Culture National Historical Park: Mound City, Hopeton Earthworks, High Bank Works, Hopewell Mound Group and Seip Earthworks.

While a Unesco designation wouldn't entail the return of land or reparations, it does mean greater local representation and education about Ohio's Native American history.

It would be fitting if, during the year of the 200th anniversary of Moroni's visit, these historic sites finally receive Unesco recognition. 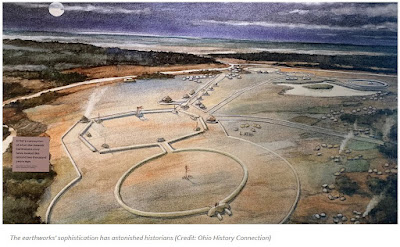