Readers of this blog know that I have a relatively naturalistic perspective on events in Church history. I think God works with us through natural means as much as possible, consistent with 1 Nephi 3:7.

I will go and do the things which the Lord hath commanded, for I know that the Lord giveth no commandments unto the children of men, save he shall prepare a way for them that they may accomplish the thing which he commandeth them.

God prepares a way, but we have to accomplish the tasks.

There are lots of examples in the scriptures. God didn't magically move the plates of brass from Laban's treasury to Lehi's tent in the wilderness; God had Nephi procure them. God didn't build a boat for Lehi; instead, He gave instructions to Nephi, who went about the work.

Jonathan Edwards expressed this concept: Mortal men are capable of imparting the knowledge of human arts and sciences, and skill in temporal affairs. God is the author of such knowledge by those means: flesh and blood is made use of by God as the mediate or second cause of it; he conveys it by the power and influence of natural means.

When a task is impossible by natural means, the Lord intervenes, such as touching the stones prepared by the brother of Jared. 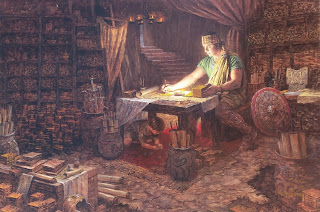 In like manner, the Lord prepared Joseph Smith from a young age to be able to translate the plates.

The Nephites kept records, Mormon abridged them, and Moroni deposited them.

Moroni told Joseph the records were "written and deposited" in the Hill Cumorah not far from Joseph's home near Palmyra, NY, which makes sense. These records were not "written in Mesoamerica" and then "deposited in New York" by magical or supernatural or superhuman means.

Moroni told Joseph he had to obtain the plates and translate them.

The one thing Joseph couldn't do on his own was translate the characters, but he copied the characters and studied them with the U&T until he was able to translate the engravings on the plates, using his own lexicon which he had acquired starting at a young age.

Thus, the production of the Book of Mormon involved natural means as much as possible.

Yet our intellectuals want us to believe instead that all Joseph did was read words that appeared on a stone, provided there by the MIST (mysterious incognito supernatural translator).

Early on, both sides agreed that Joseph Smith produced the Book of Mormon by reading the words off a the stone-in-the-hat (SITH).

There are SITH sayers everywhere. It's astonishing how quickly this narrative has become prevalent. It is taken for granted now, even though it is only one of several interpretations of the historical documents.

Lately, certain LDS historians and intellectuals have promoted a narrative that when Joseph Smith and Oliver Cowdery testified that Joseph translated the engravings on the plates with the Urim and Thummum, they were actually referring to the seer stone Joseph found in a well long before he got the plates from Moroni.

This is important because those who say Joseph used the "peep stone" also say he never used the plates. Instead of an actual translation of ancient Nephite records, the SITH theory leaves us with an entirely spiritual experience with no connection to the plates or any authentic history of real people in a real place.

However, Oliver Cowdery clearly distinguished between the Nephite interpreters and the seer stone. We've discussed before how he published Letter I in response to the "peep stone" claim in the 1834 book Mormonism Unvailed. That book had identified two alternative explanations for the translation. One was by means of a "peep stone." The other was by means of the Urim and Thummim.

In response, Oliver wrote, "Day after day I continued, uninterrupted, to write from his mouth, as he translated with the Urim and Thummim, or, as the Nephites would have said, ‘Interpreters,’ the history or record called ‘The Book of Mormon.’"

Those who promote the stone-in-the-hat narrative (SITH) rationalize that testimony away, mainly by ignoring the context of Letter I.*
However, Oliver made the distinction even more clear when he rejoined the Church at a special conference held at Kanesville, Iowa, Oct. 21, 1848.
You may remember this image of the seer stone, published in the Joseph Smith Papers. 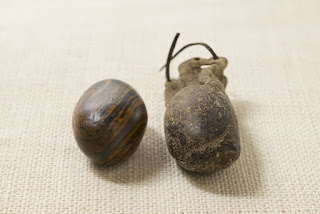 https://www.josephsmithpapers.org/topic/seer-stone
An article in the Ensign from October 2015 explains some of the history of this stone.

According to Joseph Smith’s history, he returned the Urim and Thummim, or Nephite “interpreters,” to the angel. But what became of the other seer stone or stones that Joseph used in translating the Book of Mormon?

David Whitmer wrote that “after the translation of the Book of Mormon was finished, early in the spring of 1830, before April 6th, Joseph gave the stone to Oliver Cowdery and told me as well as the rest that he was through with it, and he did not use the stone any more.”26

Oliver, who was outside the Church for a decade until being rebaptized in 1848, planned to go west to be with the Saints in Utah, but he died in 1850 in Richmond, Missouri, before making the trip.27 Phineas Young, who had helped bring Oliver Cowdery back into the Church, obtained the seer stone from Oliver’s widow, who was David Whitmer’s sister, Elizabeth Ann Whitmer Cowdery. Phineas in turn gave it to his brother Brigham Young.28
https://www.churchofjesuschrist.org/study/ensign/2015/10/joseph-the-seer?lang=eng
If, as the history indicates, Oliver possessed the stone from 1830 until he died, that means he had it with him in 1848 when he rejoined the Church in Iowa.
Oliver's statement upon rejoining was carefully recorded by Reuben Miller. As you read this, realize that Oliver had the seer stone with him, possibly in his pocket.
Friends and Brethren, my name is Cowdery—Oliver Cowdery. In the early history of this Church I stood identified with her, and one in her councils. True it is that the gifts and callings of God are without repentance. Not because I was better than the rest of mankind was I called; but, to fulfill the purposes of God, He called me to a high and holy calling.
I wrote, with my own pen, the entire Book of Mormon (save a few pages), as it fell from the lips of the Prophet Joseph Smith, as he translated it by the gift and power of God, by the means of the Urim and Thummim, or, as it is called by that book, ‘holy interpreters.’
I beheld with my eyes and handled with my hands the gold plates from which it was translated. I also saw with my eyes and handled with my hands the ‘holy interpreters.’ That book is true. Sidney Rigdon did not write it. Mr. Spaulding did not write it. I wrote it myself as it fell from the lips of the Prophet.

On that occasion, Oliver did not produce the seer stone to show the audience as corroboration of his testimony.

He did not say Joseph translated any portion of the record by means of that seer stone.

He did not equate the seer stone with the holy interpreters.

Instead, he reaffirmed what he had written in 1834 in response to Mormonism Unvailed.

What is the significance of this seer stone? 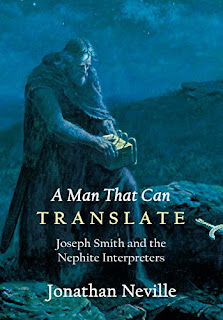 Readers of A Man that Can Translate know that, based upon detailed analysis of the Original and Printer's manuscripts and the language of the text, I propose Joseph used the seer stone to conduct one or more demonstrations of the translation process. He was forbidden from displaying the plates or the interpreters, but his supporters were curious.

Presumably they were familiar with the idea of seer stones, which were widely known in western New York. Conducting a demonstration would satisfy their curiosity and leave Joseph and his scribes in relative peace to continue the hard work of actually translating.

For the same reason, it makes sense that Joseph would use the seer stone in the process of receiving revelations, as several accounts describe. This doesn't mean that words appeared on the stone, but Joseph, receiving revelation directly in his mind, would use SITH as a sort of prop to help build faith and confidence among his supporters.

Once Joseph completed the translation and had begun dictating revelations directly, he had no more use of the seer stone so he gave it to Oliver as a sort of souvenir.

Oliver knew the truth, so he testified about what really happened; i.e., that Joseph translated the plates by means of the Nephite interpreters, which he and Joseph called the Urim and Thummim because that's how Moroni identified the interpreters.

_____
*The article in the Ensign from October 2015 claims that "By 1833, Joseph Smith and his associates began using the biblical term “Urim and Thummim” to refer to any stones used to receive divine revelations, including both the Nephite interpreters and the single seer stone."
The footnote there cites Wilford Woodruff's ambiguous journal entry from 1841. But once we understand the context of Oliver's Letter I--the clear distinction between the two terms in Mormonism Unvailed-- we see that Oliver's explicit statement that Joseph used the Urim and Thummim negates the effort by revisionist historians to blur the two terms.
_____
BTW, at least for now we have this painting on the Church's website. 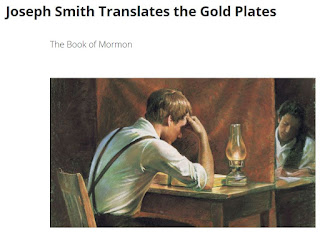 The Ensign article goes on to claim that, in "addition to using the interpreters, according to Martin Harris, Joseph also used one of his seer stones for convenience during the Book of Mormon translation. Other sources corroborate Joseph’s changing translation instruments."
An alternative explanation for these witness statements is that they observed demonstrations of the process which they inferred were the translation. Then, to refute the Spalding theory, they related the demonstration as if it was the actual translation.