The first detailed account of Moroni's visit to Joseph Smith is included in Letter IV. You can read it in Joseph's own history in the Joseph Smith Papers here:

Recall that Oliver wrote these essays with the assistance of Joseph Smith, using documents then in their possession that we no longer have. Presumably one of these documents was the notebook Oliver kept from the time he first met Joseph Smith in April 1829. He recorded things Joseph told him, which undoubtedly included the first visit of Moroni.

2. Moroni said the record was "written and deposited" not far from Joseph's house. It was not written elsewhere and transported thousands of miles to western New York.
_____ 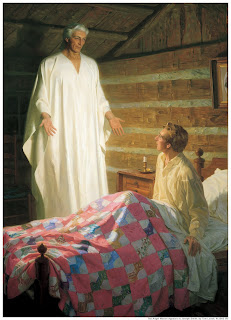 The stature of this personage was a little above the common size of men in this age; his garment was perfectly white, and had the appearance of being without seam.

Though fear was banished from his heart, yet his surprise was no less when he heard him declare himself to be a messenger sent by commandment of the Lord, to deliver a special message and to witness to him that his sins were forgiven, and that his prayers were heard; and that the scriptures might be fulfilled, which say—

“God has chosen the foolish things of the world to confound the things which are mighty; and base things of the world, and things which are despised, has God chosen; yea, and things which are not, to bring to nought things which are that no flesh should glory in his presence. Therefore, says the Lord, I will proceed to do a marvelous work among this people, even a marvelous work and a wonder; the wisdom of their wise shall perish, and the understanding of their prudent shall be hid; for according to his covenant which he made with his ancient saints, his people, the house of Israel must come to a knowledge of the gospel, and own that Messiah whom their fathers rejected, and with them the fulness of the Gentiles be gathered in, to rejoice in one fold under one Shepherd”.

“This cannot be brought about untill first certain preparatory things are accomplished, for so has the Lord purposed in his own mind. He has therefore chosen you as an instrument in his hand to bring to light that which shall perform his act, his strange act, and bring to pass a marvelous work and a wonder.

Wherever the sound shall go it shall cause the ears of men to tingle, and wherever it shall be proclaimed, the pure in heart shall rejoice, while those who draw near to God with their mouths, and honor him with their lips, while their hearts are far from him, will seek its overthrow, and the destruction of those by whose hands it is carried.

Therefore, marvle not if your name is made a derission, and had as a by-word among such, if you are the instrument in bringing it, by the gift of God, to the knowledge of the people.”

He then proceeded and gave a general account of the promises made to the fathers, and also gave a history of the aborigenes of this country, and said they were literal descendants of Abraham.

He represented them as once being an enlightned and intelligent people, possessing a correct knowledge of the gospel, and the plan of restoration and redemption. He said this history
was written and deposited not far from that place, and that it was our brother’s privilege, if obedient to the commandments of the Lord, to obtain and translate the same by the means of the Urim and Thummim, which were deposited for that purpose with the record.

“Yet,” said he, “the scriptures must be fulfilled before it is translated, which says that the words of a book, which were sealed, were presented to the learned; for thus has God determined to leave men without excuse, and show to the meek that his arm is <​not​> shortned that it cannot save.”

A part of the book was sealed, and was not to be opened yet. The sealed part, said he, contains the same revelation which was given to John upon the isles of Patmos, and when the people of the Lord are prepared, and found worthy, then it will be unfolded unto them.

On the subject of bringing to light the unsealed part of this record, it may be proper to say, that our brother was expressly informed, that it must be done with an eye single to the glory of God; if this consideration did not wholly characterize all his procedings in relation to it, the adversary of truth would overcome him, or at least prevent his making that proficiency in this glorious work which he otherwise would.

While describing the place where the record was deposited, he gave a minute relation of it, and the vision of his mind being opened at the same time, he was permitted to view it critically; and previously being acquainted with the place, he was able to follow the direction of the vision, afterward, according to the voice of the angel, and obtain the book.
Posted by jonathan3d at 11:10 AM