Some people find President Cowdery's Letter VII to be a little long, so here are some excerpts to enjoy. These are directly from the version in the Joseph Smith Papers, in Joseph's own history now referred to as History, 1834-1836.

President Cowdery was as specific as possible when he identified the hill Cumorah. He claimed it was a fact that this hill in New York, from which Joseph obtained the plates from Moroni, was also the setting for the final battles of the Jaredites and the Nephites, as well as the location of Mormon's depository of Nephite records.

You are acquainted with the mail road from Palmyra, Wayne Co. to Canandaigua, Ontario Co. N.Y. 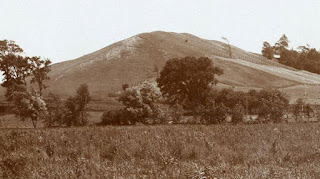 [Note: President Cowdery wrote these essays as letters to W.W. Phelps, who was living in Missouri at the time. Here, is referring to what is now State Route 21, the road that runs directly in front of the Hill Cumorah Visitors Center today]

and also, as you pass from the former to the latter place, before arriving at the little village of Manchester, say from three to four, or about four miles from Palmyra, you pass a large hill on the east side of the road. Why I say large, is because it is as large perhaps, as any in that country. To a person acquainted with this road, a description would be unnecessary, as it is the largest and rises the highest of any on that rout. The north end rises quite sudden until it assumes a level with the more southerly extremity, and I think I may say an elevation higher than at the south a short distance, say half or three fourths of a mile. As you pass toward canandaigua it lessens gradually until the surface assumes its common level, or is broken by other smaller hills or ridges, water courses and ravines. I think I am justified in saying that this is the highest hill for some distance round, and I am certain that its appearance, as it rises so suddenly from a plain on the north, must attract the notice of the traveller as he passes by.


At about one mile west rises another ridge of less height, running parallel with the former, leaving a beautiful vale between. The soil is of the first quality for the country, and under a state of cultivation, which gives a prospect at once imposing, when one reflects on the fact, that here, between these hills, the entire power and national strength of both the Jaredites and Nephites were destroyed.

[Note: President Cowdery was referring to the original edition of the Book of Mormon, which was not divided into chapter and verse. These pages are now Mormon chapter 6]

you will read Mormon’s account of the last great struggle of his people, as they were encamped round this hill Cumorah. (it is printed Camorah, which is an error.)

[Note: "Camorah" was a typo in the original edition of the Book of Mormon, but it suggests the way Joseph pronounced the word because Oliver wrote phonetically.] 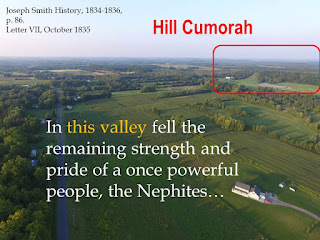 In this vally [sic] fell the remaining strength and pride of a once powerful people, the Nephites—once so highly favored of the Lord, but at that time in darkness, doomed to suffer extermination by the hand of their barbarous and uncivilized brethren.

From the top of this hill, Mormon, with a few others, after the battle, gazed with horror upon the mangled remains of those who, the day before, were filled with anxiety, hope or doubt.

A few had fled to the South, who were hunted down by the victorious party, and all who would not deny the Saviour and his religion, were put to death. Mormon himself, according to the record of his son Moroni, was also slain....

He (Mormon), however, by divine appointment, abridged from those records, in his own style and language, a short account of the more important and prominent items, from the days of Lehi to his own time, after which he deposited, as he says, on the 529th page, all the records in this same hill, Cumorah and after gave his small record to his son Moroni, who, as appears from the same, finished, after witnessing the extinction of his people as a nation.

This hill, by the Jaredites, was called Ramah: by it, or around it pitched the famous army of Coriantumr their tents.

Coriantumr was the last king of the Jaredites The opposing army were to the west, and in this same vally, and near by, from day to day, did that mighty race spill their blood, in wrath, contending, as it were, brother against brother, and father, against son. In this same spot, in full view from the top of this same hill, one may gaze with astonishment upon the ground which was twice covered with the dead and dying of our fellow men. Here may be seen where once sunk to nought the pride and strength of two mighty nations; and here may be contemplated, in solitude, while nothing but the faithful record of Mormon and Moroni is now extant to inform us of the fact, scenes of misery and distress...

In this vale lie commingled, in one mass of ruin the ashes of thousands,

[Note: this refers to the Jaredites, of whom there were apparently fewer than 10,000 killed at Cumorah]

and in this vale was destined to consume the fair forms and vigerous [sic] systems of tens of thousands of the human race—blood mixed with blood, flesh with flesh, bones with bones and dust with dust!

[Note: this refers to the Nephites and Lamanites]
Posted by jonathan3d at 3:01 PM