President George Albert Smith, speaking as a member of the Quorum of the Twelve in General Conference, April 1906, discussed his visit to Cumorah.

“We visited the Hill Cumorah and were accorded the courtesy of going thereon by the wife of Mr. George Sampson, a brother of Admiral Wm. Sampson, who before his death owned the property. When we went up there and looked around, we felt that we were standing on holy ground. The brethren located, as near as they thought was possible, the place from which the plates of the Book of Mormon were taken by the Prophet. We were delighted to be there. Looking over the surrounding country we remembered that two great races of people had wound up their existence in the vicinity, had fought their last fight, and that hundreds of thousands had been slain within sight of that hill. Evidence of the great battles that have been fought there in days gone by are manifest in the numerous spear and arrow-heads that have been found by farmers while plowing in that neighborhood. We were fortunate enough to obtain a few of the arrowheads.” (George Albert Smith, Conference Report, April 1906, Third Day—Morning Session p. 56).
https://archive.org/stream/conferencereport1906a#page/n57/mode/2up

As readers here know, lots of war implements have been found on and near Cumorah.

President Smith's address was published in the Deseret News on June 30, 1906, here: 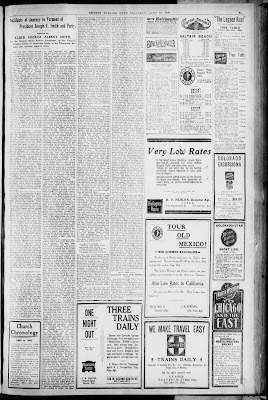 I think it's cool to see what the modern prophets and apostles have said about Cumorah, but as I've discussed before, there are LDS scholars who want members of the Church to reject Letter VII and the New York Cumorah. They are saying we cannot pay attention to what modern prophets and apostles have said about Cumorah, with only two exceptions: currently living Apostles and Presidents of the Church when speaking as President. So far as I know, no one in these two categories has mentioned Cumorah publicly.

In other words, these LDS scholars reject anything said or written

1) by modern apostles who have passed away and

2) by Presidents of the Church before they became President.

If that sounds weird to you, you're not alone. It sounds weird to me as well, but that's what they're saying. According to these LDS scholars, you're supposed to disbelieve what George Albert Smith said in General Conference because he was not President of the Church at the time.

The passage I quoted above was cited at askgramps.org, where it elicited a classic response from a Mesoamerican advocate. It follows the standard Mesomania format; i.e., 1) establish fake criteria designed to describe Mesoamerica that don't exist in New York, 2) deny the evidence that does exist in North America, and 3) ask why the Book of Mormon doesn't mention snow (it doesn't mention weather at all, with one exception, and it never mentions volcanoes, jungles, jade or jaguars (or any other Mesoamerican species.) You have to read it to believe it: https://askgramps.org/why-cant-we-find-any-evidences-at-hill-cumorah/. They even posted clips from "In Search of Ancient Cumorah." It's awesome.