People keep contacting me to say that Letter VII was just Oliver Cowdery's speculation about Cumorah. This is the position taken by the citation cartel. Why? Because Oliver's Letter VII contradicts their Mesoamerican theory of Book of Mormon geography.

As you can see from these citations, Letter VII and the New York Cumorah it describes were universally accepted and understood during Joseph Smith's lifetime.

People can believe whatever they want, of course. But in my view, the historical evidence supports Oliver.

Consider what Oliver himself wrote about his sense of responsibility. The following is an excerpt from the Preface to my next book, The Editors: Joseph, William, and Don Carlos Smith:

"One important lesson was expressed by Oliver Cowdery. When he announced his resignation from the Messenger and Advocate in August 1837, he wrote:

"a man is responsible to God for all he writes. If his communications are not according to the truths of heaven, men may follow incorrect principles, and digress, step after step from the straight path, till arguments, persuasions and facts, are as unheeded as the idle vision, when darkness and death rivet their destructive chains to be beaten off no more.

"When this last reflection rises in the mind, the heart almost sinks within this bosom, lest in consequence of some darkness over the intellect, or some deep anxiety and concern, occasioned by inevitable and irresistable pecuniary embarrassment, I may have dropped an item, or left unintelligible some important fact, which has occasioned an incorrect understanding on matters of eternal life."

This is a strong statement of responsibility that lends additional credence to Letter VII, which Oliver published in the Messenger and Advocate.
______________________

Consider what is going on here. The Mesoamerican two-Cumorah theory directly contradicts Oliver Cowdery's unambiguous declaration that the final wars of the Nephites and Jaredites took place in western New York. Therefore, according to the citation cartel, Letter VII cannot be true. The effort to undermine the credibility and reliability of Oliver Cowdery has only one purpose: to defend an ideological fixation on the Mesoamerican theory of Book of Mormon geography.

They go on to insist that Joseph Smith passively adopted Cowdery's speculation when he had his scribes copy Letter VII into his journal, saw Letter VII republished multiple times, and referred to Cumorah (and Moroni) in D&C 128.

Here are more facts to consider. Oliver Cowdery was the principal scribe of the Restoration. He wrote in his own handwriting all of the Book of Mormon (twice) and much of the D&C and PoGP. He is responsible for most of the early Church history we have, including the 8 letters to W.W. Phelps and other journal entries. He was the only witness besides Joseph Smith of the restoration of the Priesthood, the restoration of the keys, and much more. He was called by revelation to print Church materials, select and write books for Church schools, and to "copy, correct, and select" materials for Church publications. [D&C 55, 57, 68, 104]
_______________

Oliver published all of his letters about Church history, including Letter VII, when he was working at the Messenger and Advocate and felt the responsibility he described above. Some have criticized the letters as too verbose, but when we see what Oliver was thinking--that he feared dropping an item or leaving an important fact unintelligible--we can better understand why he tried to be as specific and comprehensive as possible.

For the first 100 years of Church history, Oliver's writings were sufficiently clear and understandable that there was no confusion about the location of Cumorah. Starting in the 1920s, though, scholars began digressing from what was clearly expressed by Oliver and fully endorsed by Joseph Smith.

Now, in 2016, we have LDS scholars who claim Oliver Cowdery disguised his speculation as facts. One wonders how much more explicit and clear Oliver could have been, or what more Joseph could have done to endorse what Oliver wrote. Remember, Letter VII was widely--probably universally--known and accepted among Church members during Joseph's lifetime.

As members of the Church read Letter VII and ponder its validity, I hope they keep in mind what the author himself wrote about his duty, his intentions, and his aspirations. In my opinion, Oliver discharged his responsibilities very well. Not only in writing the entire Book of Mormon, twice, in his own handwriting, and not only in recording what is now the Book of Moses and many of the original revelations, and not only in all the other work he did in publishing, but also in writing and publishing the eight letters, including Letter VII.

When assessing Oliver's credibility and reliability, readers of Letter VII should also consider the life Oliver led and his reputation as a well-respected lawyer. 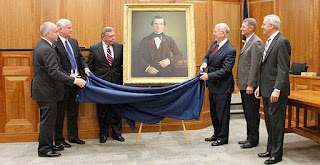 In November 2013, the BYU Law School unveiled the painting of Oliver Cowdery that appears at the beginning of this blog. An article on LDS.org discusses the event and some of Oliver's life events and reputation. The following are edited extracts from the article.

Elder Steven E. Snow of the Seventy, Church Historian and Recorder, noted that Oliver died of tuberculosis in Richmond, Missouri, before he could join the Saints in Utah. He had gone there to persuade David Whitmer to join him.

“We can only wonder what great accomplishments he might have given … had he survived to an older age,” Elder Snow said.

“Certainly in the early days of the Church there was no closer confidant to the Prophet Joseph Smith than Oliver,” he said. “He was next in authority only to Joseph and was present at many of the critical events in the Restoration of the gospel.”

In addition to being one of the Three Witnesses, he was present during the restoration of the Aaronic and Melchizedek Priesthoods and “during those marvelous manifestations at the Kirtland Temple,” Elder Snow noted.

“There are many great LDS attorneys, and Oliver Cowdery was the first LDS attorney, so it just makes sense that his portrait will hang here in this school.”

Church historians have studied Oliver's life and law practice. Oliver was excommunicated on charges he disputed, yet he never became antagonistic toward the Church.

Attorney Jeffrey N. Walker, adjunct faculty member at the school and a senior adviser and volume editor for the Joseph Smith Papers Project of the Church History Department, noted that “He had beautiful handwriting. We ended up scanning almost 2,500 pages of his law practice. Since then we’ve been back three other times, and we now have over 15,000 pages of the law practice in Tiffin as we try to put together exactly how he practiced law.

“What we found was that he was a very clever, smart, and capable lawyer, one very prominently recognized in the community and that was well-respected among his own colleagues of lawyers.”

In the end, when he went to Winter Quarters to seek readmission to the Church, Oliver said, “I feel that I can honorably return. I sustained an honorable character before the world during my absence from you,” Brother Walker recounted.

He mentioned 10 of those skills, including accuracy, an understanding of authority, an acute and analytical mind, forensic (debate) skills, tolerance for the views of others, legal resourcefulness, his character as justice of the peace, his putting of family first in making difficult decisions, his sense of timing, and his knowledge of the importance of witnesses, affidavits, and testimony under oath.

In his letters, Oliver was careful to distinguish between fact and speculation. For example, he speculated about how deep Moroni originally buried the plates. But he said it was a factthat the Nephites and Jaredites fought their final battles in the valley west of the Hill Cumorah in New York.

On one hand, we have Oliver Cowdery as one of the Three Witnesses, whose entire life demonstrated his knowledge of the importance of witnesses, who wrote Letter VII under a sense of deep responsibility to be accurate and truthful.

On the other hand, we have LDS scholars who, purely for ideological purposes, question Oliver's reliability and veracity on the important question of Cumorah.