In General Conference on Sunday, October 2, 2022, Elder Quentin L. Cook referenced the Life of Heber C. Kimball, the biography of his great-grandfather. Heber, like Brigham Young, lived in western New York and joined the Church after Joseph and the Saints had moved to Kirtland, Ohio.

Heber and Brigham both testified about the repository of Nephite records in the hill Cumorah as discussed here: https://www.lettervii.com/p/cumorahs-cave-by-cameron-packer.html

Heber also visited the site after he joined the Church in April 1832.

He wrote, "The hill Cumorah is a high hill for that country, and had the appearance of a fortification or entrenchment around it."When he was 14 years old, Kimball worked in his father's blacksmith shop in the Bloomfield area west of Canandaigua and east of Avon. His observations of the area are quoted in his biography, Life of Heber C. Kimball, on p. 25 (or p. 50, depending on the edition):"From the time Father Bosley located near Avon, he found and plowed up axes and irons, and had sufficient to make his mill irons, and had always abundance of iron on hand without purchasing. "In the towns of Bloomfield, Victor, Manchester, and in the regions round about, there were hills upon the tops of which were entrenchments and fortifications, and in them were human bones, axes, tomahawks, points of arrows, beads and pipes, which were frequently found; and it was a common occurrence in the country to plow up axes, which I have done many times myself."I have visited the fortifications on the tops of those hills frequently, and the one near Bloomfield I have crossed hundreds of times, which is on the bluff of Honeyoye River, and the outlet of Honeyoye Lake...."The hill Cumorah is a high hill for that country, and had the appearance of a fortification or entrenchment around it. In the State of New York, probably there are hundreds of these fortifications which are now visible, and I have seen them in many other parts of the United States."Heber's biographer, Elder Orson F. Whitney of the Quorum of the Twelve, commented "Readers of the Book of Mormon will remember that in this very region, according to that sacred record, the final battles were fought between the Nephites and Lamanites. At the hill Cumorah, the Nephites made their last stand prior to their utter extermination, A.D., 385."Thus was Heber preaching the Gospel to the Gentiles, above the graves of the ancients of Israel, whose records with the fullness of that Gospel, and the relics of their prowess and civilization, were now 'whispering from the dust.'" 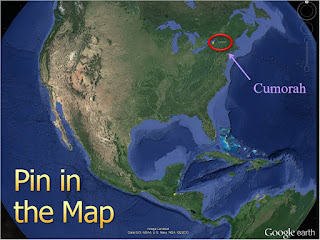