Stephens’ Incidents of Travel and the Times and Seasons 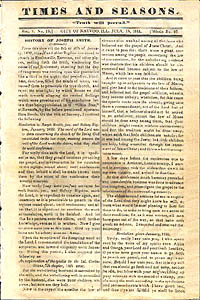 6. 1841 Bernhisel letter. This is the thank-you note, purportedly from Joseph Smith, to John Bernhisel, who had given a copy of the Stephens' books to Wilford Woodruff to give to the Prophet. Brother Hedges infers that the letter is in John Taylor's handwriting, but so far the handwriting remains unidentified. The significance of the letter, based on its content alone, is unclear; it does not link specific sites anywhere in the Americas to the Book of Mormon.

More importantly, I think Wilford Woodruff drafted this letter and had it written out by someone with good penmanship. An entire chapter in The Editors: Joseph, William, and Don Carlos Smith is devoted to this issue. The evidence, in my view, is overwhelming, but we'll see what others think when the book is released later in June. I don't think Joseph had anything to do with this letter and never even saw it.

7. May 2, 1842 T&S editorial: "A Catacomb of Mummies Found in Kentucky." This 231-word editorial accompanies an extract from Josiah Priest's book American Antiquities. It is signed "ED." for Editor. Joseph Smith was the nominal editor at the time, which has given rise to a long-held assumption that he wrote, edited, or approved of the editorial. As I've shown in Brought to Light, the evidence instead points to other authors, operating under the generic umbrella of the "Ed." signature. I can find no extrinsic evidence that Joseph Smith wrote, edited, approved of, or even read any of these editorials (this one or the following four). As explained elsewhere, I think William Smith was editing the Times and Seasons, with the assistance of W.W. Phelps. William promoted the Mesoamerican setting even after he was excommunicated.

8. July 15, 1842 T&S editorial: "American Antiquities." This 249-word editorial accompanies another extract from American Antiquities. Again, it is signed "ED." for Editor. In Brought to Light, I demonstrate that the quotations in the July 15 editorial comes from the 2d or 3d edition; i.e., the one Benjamin Winchester used elsewhere. (Parley P. Pratt used the 5th Edition.) For the reasons set out in that book, I think Winchester probably wrote this editorial. His friend William Smith would have no problem publishing this editorial, or the ones that followed.

9. Sept. 15, 1842 T&S editorial: "Extract." This editorial comments on an extended extract from Stephens. It is unsigned (anonymous), but it concludes with the statement "surely the Lord worketh and none can hinder," an allusion to the masthead of Winchester's newspaper, the Gospel Reflector. I find it highly unlikely that Joseph Smith would have taken the time to find this long extract from the Stephens book and write this editorial without signing it, let alone without mentioning it in his journal or to any of the people around him (none of whom noted a single incident in which Joseph commented on or even read the Stephens books). Winchester never signed his articles, either when originally published in the Gospel Reflector or when republished in the Times and Seasons.

10. Sept. 15, 1842 T&S editorial: "Facts Are Stubborn Things." This brief editorial accompanies another brief extract from Stephens. The author would have had to search the Stephens books to find this quotation. The title comes from a famous saying by John Adams. I think Winchester wrote this editorial as well, although Phelps or William Smith could have done it (or edited it).

11. Oct. 1, 1842 T&S editorial: "Zarahemla." This is the editorial that claims Zarahemla is located in Quirigua. Although the writer equivocates a little, he places a heavy burden of proof onto those who disagree with that setting. It is this preposterous claim that I propose led Joseph Smith--who didn't see the article until after it was published--to resign as editor and fire William Smith from the Wasp (and the Times and Seasons).