Many Latter-day Saints remain perplexed at the revisionist Church history narratives we see replacing long-familiar traditional history. In my view, these changes are based not on new historical sources or better analysis, but instead they are driven by specific agendas.

Brother Harper's books Joseph Smith's First Vision and First Vision: Memory and Mormon Origins, contain some wonderful insights into the work of historians that we'll discuss in this series.

BTW, on these blogs I'm going to start posting only summaries of the longer articles I send to subscribers to MOBOM, the Museum of the Book of Mormon. You can subscribe for free here:

Steven C. Harper earned a PhD in early American history from Lehigh University, where he was Lawrence Henry Gipson Fellow. He taught at Brigham Young University campuses in Hawaii and Utah, and served as a volume editor of The Joseph Smith Papers and later as managing historian and a general editor of Saints: The Story of The Church of Jesus Christ in the Latter Days. He is the author of Promised Land (2006) a study of colonial Pennsylvania's dispossession of the Lenape or Delawares. He is also the author of dozens of articles and two books on early Latter-day Saint history. He is currently editor of BYU Studies Quarterly and professor of Church History and Doctrine at Brigham Young University.

Here we see the revolving door between BYU and the Church History Department, which helps explain why Saints teaches what it does. We'll discuss that throughout this series.

BYU Studies continues to produce important articles, such as those in the issue focusing on the First Vision, which you can see here:

Like most Latter-day Saints, I love BYU Studies. I have physical copies of dozens of issues, although the digital copies are more useful. It has always been disappointing to see BYU Studies promote the Mesoamerican/Two-Cumorahs theory (M2C), but we all understood that was inevitable because the long-time editor was one of the major proponents of M2C.

It's similar to the annoying editorial stance of Book of Mormon Central, FAIRLDS, the Interpreter, and the rest of the M2C citation cartel. They produce a lot of great material, but much of it is tainted by their M2C worldview that directly contradicts the Church's position of neutrality on these issues.

When Brother Harper replaced John W. Welch as Editor of BYU Studies, some of us hoped he would change direction and extract BYU Studies from the M2C citation cartel. 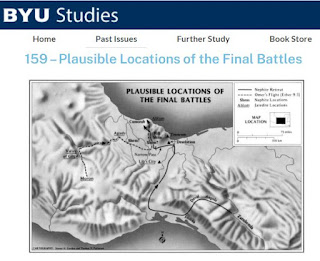 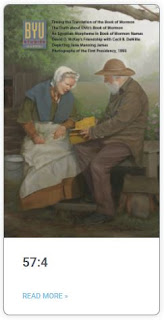 BYU Studies also promoted the fake story that it was Moroni who showed the plates to Mary Whitmer instead of Nephi (one of the Three Nephites), as both Mary and David explained.

The article simply omits David Whitmer's statement about what Joseph said after they encountered the messenger on the way to Fayette from Harmony.

Shortly afterwards, David relates, the Prophet looked very white but with a heavenly appearance and said their visitor was one of the three Nephites to whom the Savior gave the promise of life on earth until He should come in power. After arriving home, David again saw this personage, and mother Whitmer, who was very kind to Joseph Smith, is said to have seen not only this Nephite, but to have also been shown by him the sealed and unsealed portions of the plates from which the Book of Mormon was translated.

As we've discussed before, this wasn't the only time Joseph identified this messenger as one of the Nephites. It's pretty easy to create fake history by simply omitting historical references that contradict the history you want to promote.

Why would M2C proponents insist it was Moroni who showed the plates to Mary Whitmer?

The irony in all of this is that Brother Harper is an outstanding historian. His discussion of the intersection between memory and history incisive. It deserves a lot of attention, as we'll see in this series.