Here's an interesting reference to Joseph Smith teaching about the Hill Cumorah in 1835 or 1836.

Joseph Curtis reminiscences and diary, October 1839-March 1881. This passage was recorded no later than October 1839.

In the spring of 1835 Joseph smith in Company with his father & mother & some others came to Michigan & paid us a visit-in a meeting stated the reason he preached the doctrin he did I will state a few things according to my memory-as a revival of some of the secs was going on some of this fathers family joined in with the revival himself being quite young he feeling an anxiety to be religious his mind some what troubled this scripture came to his mind which sayes if a man lack wisdom let him ask of god who giveth liberaly and upbraideth not believing it he went with a determinatio[n] to obtain to enquire of the lord himself after some struggle the Lord manifested to him that the different sects were rong also that the Lord had a great work for him to do-it worried his mind-he told his father-his father told him to do as the Lord manifested - had other manifestations saw an angel with a view of the hill cumorah & the plates of gold had certain instructions got the plates & by the assistance of the urim & Thumin translated them by the gift & power of God also stated he had done nothing except he more than he was commanded to do & for this his name was cast out as evil for this he was persecuted[.] 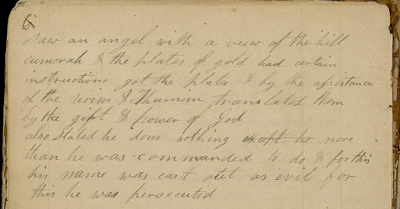 [Note: some think the visit was October 1834. Joseph could have made multiple visits to Michigan.]

You can see this reference in the Church History library. Search for Joseph Curtis reminiscences and go to page 12/208.

The following link may or may not work: