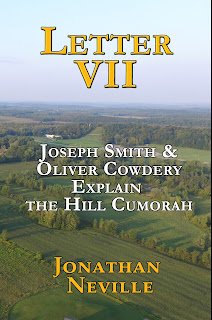 So many people have asked for a way to explain Letter VII to their friends that I’m posting this summary which you can print out and share with your friends and family.

Here is the link:

You can also print it and put it inside your copy of my Letter VII book when you share it.

There are a lot of details beyond this brief summary, of course. That's why I wrote the book about it. I also have a lot of information on this blog.

Thanks to the efforts of certain intellectuals, most people have never heard of Letter VII. At first, they may be skeptical that one letter can make a difference. But when you learn about it, you discover this was much more than just "a letter." This was a formal declaration of a series of facts, written by a member of the First Presidency (President Cowdery) and endorsed by the entire First Presidency and Quorum of the Twelve at the time. In the ensuing 150 years, every member of those quorums who has addressed the issue has affirmed Letter VII; no member of those quorums has ever contradicted Letter VII.

Below is the text of the file you can print from the above link:
_____

Most members of the Church believe the Hill Cumorah is in New York. Church leaders have consistently taught this for over 150 years.

However, some intellectuals in the Church—including faculty at BYU and CES—claim there are “two Cumorahs.” They rationalize that New York is too far from Central America (Mesoamerica) for the hill in New York to be the scene of the final battles of the Jaredites and the Nephites.

Because these intellectuals have trained thousands of LDS students for decades, their ideas have permeated the Church. The “two-Cumorahs” theory is being taught in Church media and at Church visitors centers, but it has never been taught by a single member of the First Presidency or Quorum of the Twelve.

The efforts of the intellectuals have caused confusion among members and investigators.

Recent discoveries in Church history reaffirm the original teaching that there is one Cumorah and it is in New York. For example, there is a lot of information in the book titled Letter VII: Joseph Smith and Oliver Cowdery Explain the Hill Cumorah.

In response, the intellectuals are teaching their students that the prophets and apostles are wrong.

This summary of Church history will help members understand the issue so they can support the Brethren when confronted with arguments against the New York Cumorah.

1. In 1834, Joseph Smith and Oliver Cowdery decided to publish a series of letters about Church history in the Church newspaper titled The Messenger and Advocate. This was in response to anti-Mormon publications that were disrupting the missionary effort.

2. Oliver wrote the letters with Joseph’s assistance. They published eight letters between October 1834 and October 1835.

3. A section of Letter I is included as a footnote in the Pearl of Great Price at the end of Joseph Smith—History.

4. In December 1834, Joseph ordained Oliver Cowdery as Assistant President of the Church, explaining that this made him the spokesman. Joseph later referred to these letters as “President Cowdery’s letters.”

5. In Letter VII, published in July 1835, President Cowdery described the Hill Cumorah in New York. He explained that “at about one mile west rises another ridge of less height, running parallel with the former” and declares it was a “fact that here, between these hills, the entire power and national strength of both the Jaredites and Nephites were destroyed.” He emphasized that “in this valley fell the remaining strength and price of a once powerful people, the Nephites.” “This hill, by the Jaredites, was called Ramah; by it, or around it, pitched the famous army of Coriantumr their tent… The opposing army were to the west, and in this same valley, and near by.” He also explained that Mormon’s depository of Nephite records (Mormon 6:6) was in the same hill.

6. The entire First Presidency at the time endorsed these letters. Joseph Smith had President Frederick G. Williams begin the process of copying all eight letters into his history, which you can read in the Joseph Smith Papers in History, 1834-1836. (go to www.josephsmithpapers.org and search for “Letter VII.”) President Sidney Rigdon separately approved of them.

7. All members of the original Quorum of the Twelve (they were called and ordained by President Cowdery and others in February 1835) who ever mentioned Cumorah affirmed what Letter VII teaches, including Parley and Orson Pratt, Brigham Young, Heber C. Kimball, and William Smith.

9. Over the years, multiple members of the First Presidency and Quorum of the Twelve, speaking in General Conference, have affirmed the New York Cumorah. Elder James E. Talmage in Articles of Faith affirmed it, as have other apostles, including LeGrand Richards in A Marvelous Work and a Wonder.

10. No member of the Twelve or First Presidency has ever said the Hill Cumorah was anywhere else.

11. Brigham Young, Heber C. Kimball, Wilford Woodruff and others explained that on multiple occasions, Oliver and Joseph had actually visited Mormon’s depository of records in the Hill Cumorah, which explains why President Cowdery wrote that it was a fact that Cumorah was in New York.

12. The intellectuals nevertheless have framed Letter VII as "Oliver Cowdery's opinion," characterizing it as a false tradition that Joseph Smith passively accepted. They claim that all the other prophets and apostles who have affirmed the New York Cumorah were perpetuating this false tradition. They claim that Brigham Young, Heber C. Kimball, Wilford Woodruff and others were mistaken because Oliver had merely told them about a vision of a hill in Mexico.

13. The intellectuals have rejected the New York Cumorah because they think it contradicts their preferred theory that the Book of Mormon took place in Mesoamerica. To persuade their students to agree with them, they have made a series of claims about archaeology, anthropology, geology, and geography, and they have insisted on an interpretation of the text that, they claim, makes the New York setting impossible. Lately, BYU and CES have been teaching students about the Book of Mormon by using a video-game-like fantasy map that depicts Cumorah in a mythical setting.

14. Although the consistent, repeated teachings of the prophets and apostles should be enough to settle this matter, there is evidence from archaeology, anthropology, geology, and geography that supports the New York Cumorah as the scene of the final battles of the Jaredites and the Nephites. There are dozens of archaeological sites in western New York, dating to Book of Mormon times, that contain artifacts from the Ohio Hopewell civilization (the archaeological and anthropological term for the people who correspond to the Nephites). Bushels of stone weapons have been recovered from the vicinity of Cumorah. Research in the area is ongoing.


15. When the Mesoamerica/two-Cumorahs theory began to be accepted by LDS intellectuals, Joseph Fielding Smith, then Church Historian and a member of the Quorum of the Twelve, released a statement that he later reiterated after he became President of the Quorum of the Twelve. He wrote, “Because of this theory some members of the Church have become confused and greatly disturbed in their faith in the Book of Mormon.” His prophetic warning against the efforts of the intellectuals remains as valid today as it was when he originally published it.
Posted by jonathan3d at 12:09 PM