I need to post something about Letter VII that has been overlooked, but it's important to provide the context for the issue for those new to this site.

Some LDS scholars and educators are still trying to persuade people that the "real" Cumorah is in Mexico. They advocate the "two-Cumorahs" and "Mesoamerican" theories that claim Joseph Smith and Oliver Cowdery were ignorant speculators who misled the Church with a false tradition about Cumorah being in New York.

[Some people don't believe our LDS scholars and educators teach these things, but anyone who teaches the limited Mesoamerican geography models teaches exactly what I wrote in the preceding paragraph. You'll see it in BYU Studies, the Interpreter, Mesomania Meridian Magazine, FairMormon, the old FARMS stuff, everything published by the Maxwell Institute, BMAF, Book of Mormon Central (America), etc.]

Those who have read Letter VII are inoculated against these theories. That's why you won't see Letter VII being taught at BYU, CES, or in anything published by the citation cartel.* 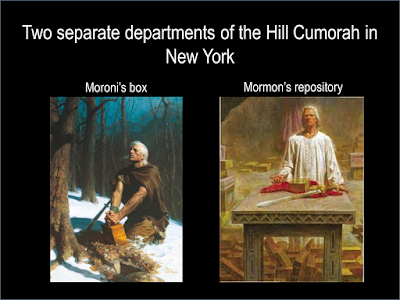 Orson Pratt, Brigham Young, Wilford Woodruff, Heber C. Kimball and others explained that Mormon's repository (Mormon 6:6) was in the same Hill Cumorah in New York from which Joseph obtained the plates from Moroni. There were two departments in the hill. Moroni's stone box was in one location, while the repository of Nephite records was in another location. I've provided the references plenty of times.

Letter VII explained this first, though.

Mormon, "by divine appointment, abridged from those records, in his own style and language, a short account of the more important and prominent items, from the days of Lehi to his own time, after which he deposited, as he says, on the 529th page, all the records in this same hill, Cumorah and after gave his small record to his son Moroni, who, as appears from the same, finished, after witnessing the extinction of his people as a nation."

Bonus clue. Those who are familiar with the two sets of plates scenario will recognize that Oliver is telling us about that here as well. Oliver says Mormon gave "his small record" to Moroni. Mormon's "small record" consisted of the abridgment, "in his own style and language." Mormon deposited all of the original records in the hill Cumorah in New York. The abridged records are the ones Joseph took to Harmony, where he translated them all (except the sealed portion), through the last leaf (the Title Page).

But in D&C 10, the Lord tells Joseph he has to translate the plates of Nephi to replace the lost 116 pages.

The plates of Nephi were not abridged. They were original records. Consequently, it is not only the title page and all the other evidence that informs us that Joseph did not have the plates of Nephi in Harmony, but here, Oliver tells us the same thing.

Mormon did not give any original plates to Moroni.

Joseph did not get the plates of Nephi from Moroni's stone box. He never had them in Harmony. He didn't get them until he arrived in Fayette.

*The sole exception of which I am aware is Book of Mormon Central, which, to their credit, did put the first edition of my short book titled Letter VII: Oliver Cowdery's Message to the World about the Hill Cumorah, into their database. But then they added critical articles without giving me a chance to respond or even including my responses that they know about. Unsuspecting readers who go to Book of Mormon Central think they are getting both sides of the issue of Letter VII, but instead they are getting a false, incomplete presentation of the issues with the editorial thumb firmly on the Mesomania side of the scale.

For this reason, I no longer even try to work with Book of Mormon Central. They are unabashed advocates of the two-Cumorahs and Mesoamerican theories, exactly as I described in the first paragraph.
Posted by jonathan3d at 1:00 PM