"From a hill in Manchester Township" 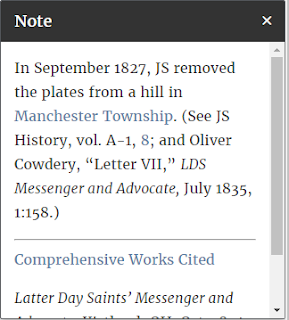 Even when the Joseph Smith Papers editors quote Letter VII, they won't identify the hill in New York as Cumorah. The reason, apparently, is that they favor the Mesoamerican setting which requires that Cumorah be located in Mexico.

Here's the latest example: footnote 5 to the Preface to Book of Mormon, circa August 1829. It reads:

In Letter VII, Oliver Cowdery not only identified the Hill Cumorah as the hill where Joseph found the plates, but he also stated it was a fact that the final battles of the Nephites and Jaredites took place in the mile-wide valley to the west.

This makes it all the more striking that the note refers to "a hill" as though the generic hill had no name and was not a critical location in Church history and Book of Mormon geography.
______________ 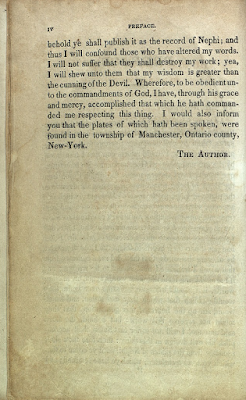 I came across this bizarre omission in footnote 5 because I was noticing something fascinating in this Preface. Joseph was explaining the lost 116 pages and the commandment he received from the Lord to "translate from the plates of Nephi" to replace what was lost. The Preface paraphrases parts of D&C 10 and quotes other parts but without quotation marks.

In my view, both passages refute the popular narrative that Joseph kept the plates under a cloth the entire time, as depicted in the latest movies you can see on request on Temple Square. The Lord told Joseph to "translate the engravings" and "translate from the plates." You can't do either if the plates are under a cloth or somewhere else.

At the end of the Preface, Joseph writes, "I would also inform you that the plates of which hath been spoken, were found in the township of Manchester, Ontario county, New York." This is where footnote 5 kicks in, with the "a hill" comment.

What I find significant here is that Joseph is explaining he used different plates--the plates of Nephi--to replace the Book of Lehi. He found it necessary to explain to readers of the Preface that these plates of Nephi "were found" in Manchester township.

Think about this a moment.

The Preface is an explanation for why Joseph translated a second set of plates--the plates of Nephi. He explains these plates were found in the township of Manchester, Ontario county, New York.

Notice he doesn't say he found them.

Instead, he writes they "were found," using the passive voice.

That's important because it's another indication that Joseph did not find the plates of Nephi. Instead, the divine messenger delivered these plates to Joseph after Joseph arrived in Fayette.

IOW, Joseph found the original plates--the ones containing the abridgments written by Mormon and Moroni--in the stone box on the Hill Cumorah, as directed by Moroni. These plates contained "the original Book of Mormon" as Joseph called it. He took these plates to Harmony and translated all of them, from the Book of Lehi through the Book of Moroni, including the "last leaf" which was the Title Page. Then he gave the plates to a divine messenger and left for Fayette with David Whitmer and Oliver Cowdery.

After Joseph arrived in Fayette, the messenger delivered the plates of Nephi. Joseph translated these as 1 Nephi through Words of Mormon. In this Preface, Joseph is telling readers that these separate plates were also found--albeit, not by him--in Manchester township. (The Hill Cumorah is in the Manchester township.)
_____________

It's pretty cool to see how the Preface itself explains the two sets of plates. Now, if only we could get the Joseph Smith Papers to acknowledge that the Hill Cumorah--the only Hill Cumorah--is in New York, we could make some good progress.
Posted by jonathan3d at 2:53 PM