Mormons Open New Century of their Faith at Cumorah

On September 22, 1923, President Heber J. Grant celebrated the first 100 years since Joseph Smith's first vision by assembling atop "Mount Cumorah" with his counselor Joseph Fielding Smith and Elder James E. Talmage and President Rudger Claweson of the Twelve, and 500 Latter-day Saints. A Rochester paper, the Democrat and Chronicle, noted the occasion.

"Proudly the purple, gold and blue of 'Cumorah-Ramah,' banner of the Mormon belief, was raised beside the Red, White and Blue of the National colors, each signifying a never-ending struggle for liberty of thought and speech, for in the 100 years since Joseph Smith, Jr., received his vision, the history of Mormonism is one of oppression from many sources."

I find it quite interesting that President Grant used the banner "Cumorah-Ramah." This is a specific designation, tying the hill in New York to the Jaredite record. I posted the full page illustrated article, published on October 7, 1823, below.
__________________

The St. Louis Star and Times and other newspapers reported on the anniversary with a syndicated piece.
"One hundred years ago Joseph Smith, prophet, founded the "Church of Jesus Christ of Latter-Day Saints." He received from heaven gold plates, mysteriously engraved, and from them, divinely guided, translated the book of Mormon.
"At least, that's his story. His followers say it should not be questioned by Christians that accept a similar story from Moses, about the tablets of the law.
"Those that wisely respect all religions, denying none, are interested especially in the changes that hve come over Mormonism, still full of vitality after 100 years. Joseph Smith made a particular virtue of many wives for one man--so did wise King Solomon, by the way.
"Modern Mormonism, rallying under the purple, blue and gold banner, 'Cumorah-Ramah,' says 'One wife is enough.' That does not mean repudiating Joseph Smith. Many good Christians tone down Jonah and the whale and, knowing that the earth is round, do not insist that the four angels actually stood at the four corners of the earth. All life is a compromise."
________________

Here is the full-page ad, with details. 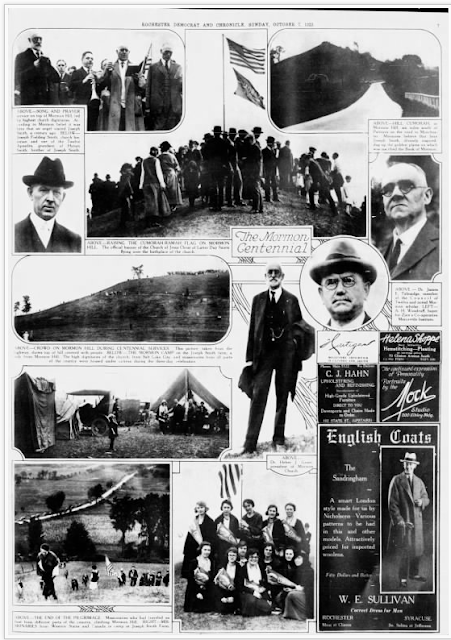 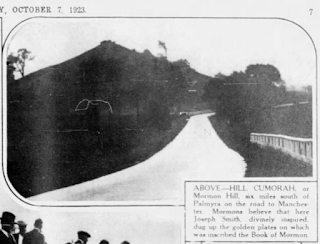 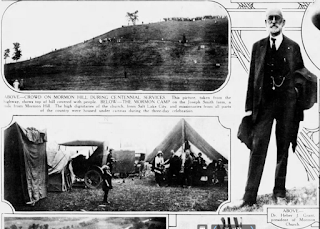 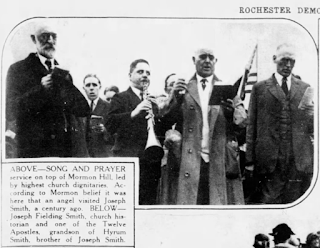 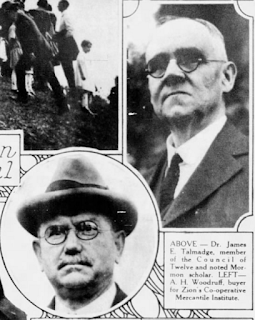 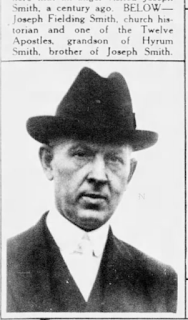 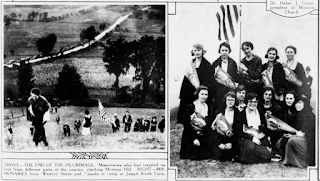 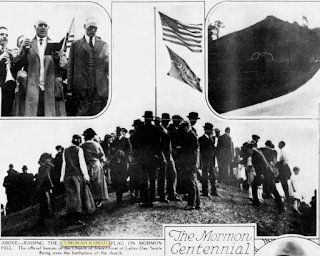